Cilie Yack is Under Attack! By Caryn Talty 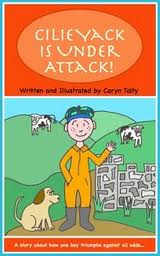 If you have celiac disease like me, you’re probably aware of the abundance of resource guides available on the market. Many of these have proved to be invaluable to the celiac community, but there remains a segment of the celiac population who haven’t been able to benefit as we have from such books—children. Thanks to Caryn Talty, a former schoolteacher living in Chicago, celiac kids now have not only an informative resource, but a creative and entertaining one at that—Cilie Yack is Under Attack! This fictional book follows the adventures of the Irish boy Cilie Yack, who experiences an array of misadventures before being diagnosed with celiac disease and becoming a young, gluten-free master chef.

This chapter book, written for ages 5 to 11, draws its strength from its charming main character, Cilie Yack, who is funny as well as honest and open about even the most  awkward details of celiac disease (one of the chapters is named “Poop Talk”). By hearing his own story as a celiac kid, including his symptoms, what testing is like, what happens when he breaks the gluten-free diet, and the adjustments his family makes, kids will not only absorb vital information about living with celiac disease, but they’ll never forget it! Uniquely set in County Clare, Ireland, where Cilie lives on a dairy farm, the book is sure to fascinate kids interested in learning about other cultures. Cilie takes care to explain the Irish and Gaelic terms and customs so that children won’t be confused.

Caryn Talty wrote this book from her heart after her oldest child was diagnosed with celiac disease and it was found by food allergy testing that he needed to eliminate 15 foods from his diet. Already feeling overwhelmed and isolated, she grew even more distressed after failing to find a support group for her son that met his needs. Then one momentous night, the character of Cilie Yack was born in Talty’s imagination.

After reading Cilie Yack, you can’t help but want to stay connected to this enchanting character. Lucky for us, Cilie announces his online cooking club, Cilie Yack’s Sous Club (http://www.cilie-yack.org), designed for kids ages 5 to 11 with food allergies or celiac disease, but kids without special dietary needs are welcome to join as well. The club allows members to organize their own local social cooking club with an emphasis on gluten-free cooking with recipes free of the most prevalent eight allergens as well as corn.

Cilie Yack will be sure to inspire your celiac child to become a gluten-free chef himself. Thankfully Talty, the President of Cilie Yack’s Sous Club for Kids, has given kids with food allergies the opportunity to follow in this delightful character’s footsteps.

13 Responses to Cilie Yack is Under Attack! By Caryn Talty