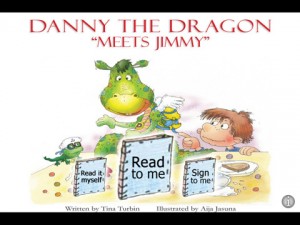 Great news to share with everyone- read this! Tina

Ever since Tina Turbin, the multi-award-winning children’s author, released Danny the Dragon Meets Jimmy, the first book of her illustrated kids book series, she has been recipient of critical praise, numerous awards and honors, and media attention. The release of her book was followed by that of a Danny the Dragon Meets Jimmy iPad and iPhone app, the first one for the hearing impaired, featuring a reading of the author’s acclaimed book with sign language interpretation. Now the author is generating even more media attention with her app than with the debut of her book, as coverage of the groundbreaking product is appearing in some of the leading news blogs in the publishing world, specifically Alice Pope’s SCBWI Children’s Market Blog and MediaBistro.com, the global web resource for media professionals.

“I knew when I decided to launch Danny the Dragon Meets Jimmy as the first [app] to offer sign language interpretation that I should expect some media interest,” the author said on her blog at DannytheDragon.com.

“However, nothing could prepare me for the attention that the Danny the Dragon app has generated.”  Turbin said she was “honored” to find her app mentioned by Alice Pope in her SCBWI (Society of Children’s Book Writers and

Alice Pope is a former editor of the Children’s Writer’s & Illustrator’s Market and authors a blog covering the children’s book market for SCBWI. In her Friday feature, “In the News This Week,” where she shares the latest children’s publishing news, she included the release of Turbin’s Danny the Dragon Meets Jimmy app with a link to the story in the Ebook Newser Blog at MediaBistro.com.

Danny the Dragon Meets Jimmy tells the story of Jimmy’s chance meeting with Danny the Dragon at the beach. An unlikely friendship develops and Jimmy’s family invites their son’s new friend home with them where they show them hospitality and family togetherness. The book has been praised for its pro-family themes and has received several awards, including the Purple Dragon Book Awards, Mom’s Choice Awards®, Indie Excellence® Awards, and the International Book Awards. Turbin’s iPad app was produced by iStoryTime, the app developer for DreamWorks Animation’s How to Train Your Dragon.

Turbin is not only an acclaimed author of kids books but is an active humanitarian in various arenas, particularly on behalf of the gluten-free community. The author was diagnosed many years ago with celiac disease, an autoimmune reaction caused by gluten, a protein in wheat, barley, and rye, which damages the intestinal tract and interferes with absorption of nutrients, resulting in a variety of serious health issues. In an effort to help celiac patients and other gluten-free individuals with the challenges of the gluten-free diet, Turbin founded GlutenFreeHelp.info, which was voted in the number-two .info website in the world. Her Gluten Free Help blog offers news, gluten-free product reviews, book reviews, gluten-free recipes, and more. Turbin advocates for children’s literacy and education; her storybook app with sign language is a testament to her support for deaf literacy. The profits for her Danny the Dragon Meets Jimmy app are being donated to support the author’s favorite causes.

Despite her already hectic schedule, the author with the help of her publicity team is busy managing the media interest and booming sales her iPad app release has generated. Meanwhile Turbin is wrapping up her West Coast book tour and getting back to what she enjoys most-writing.