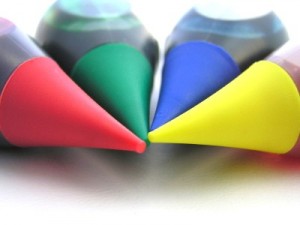 Chemical dyes are in all types of foods and despite evidence of some of them wreaking havoc; the FDA has allowed them to remain on the “safe list”.

Manufacturers like to use them due to their capabilities to enhance foods, gums etc.  The results are vivid, consistent and very appealing.

The FDA monitors the production of nine synthetic color additives they consider safe.  Consumer advocacy groups have linked two of these dyes, Red 40 and Yellow 6, to hyperactivity in many children.

It is said that sometime in late 2010 the European Union will require any product containing these dyes to be labeled as such “May have an adverse effect on activity or attention in children”.  Some companies in Britain have already phased them out.